The CARS Study: Encouraging Results for Stroke Recovery with Cerebrolysin

The data on neuroprotectants has been quite discouraging so far. Often, an agent will prove effective at reducing stroke size or improving patient outcome in laboratory models of ischemia, but this effect does not always translate to clinical trials. The authors of the CARS study point out that this disconnect may be attributed to inappropriate animal models, and the simplistic design of human clinical trials which have not taken into account the complex parallel pathways which contribute to cerebral ischemia. Previous agents have targeted one pathophysiologic pathway, but the authors suggest that a multi-targeted therapy is necessary. Cerebrolysin, a porcine-derived neuropeptide combination, may in fact be an exception to the notion that neuroprotectants do not work, based on this phase II randomized controlled clinical trial conducted in Romania, Ukraine, and Poland.

Cerebrolysin has been previously shown to be effective in animal models, even when started up to 48 hours post-stroke. It has also been studied in several small clinical trials, and as a subgroup of a larger clinical trial, in which it was shown to improve outcome and reduce mortality after severe stroke. However, the effects did not persist over time, and had disappeared by day 90. In these previous trials, Cerebrolysin was given in the acute phase and for a short duration. The authors comment that the potential neurotrophic and neuroplastic effects may have been overlooked.

The CARS study compared arm motor recovery at 90 days among patients receiving Cerebrolysin or placebo. The trial included 205 patients between 18-80 years old, with supratentorial ischemic strokes at least 4 cc in volume, with baseline mRS 0-1, moderate or minimal aphasia, and minimal to severe arm weakness. The mean baseline NIHSS was 9.2. Patients were treated with IV Cerebrolysin or placebo daily for 21 days, beginning at 24-72 hours post-stroke. All patients also received early aggressive rehabilitation for 21 days, which was started within 72 hours of stroke onset and consisted of exercise 2 hours per day, five days per week. The patients then continued to exercise for 30 minutes per day, 3 days a week post-discharge.

The primary outcome was arm motor function, measured by the Action Research Arm Test score at 90 days. The ARAT score ranges from 0 (no function) to 57 (no limitation). Patients with post-stroke baseline score 0-50 were included. The primary outcome showed a large superiority of Cerebrolysin (increased ARAT in 92%, an average of 30.7 points) over placebo (increased ARAT in 84%, an average of 15.9 points). A good functional outcome (mRS 0-1) was seen in 42% of Cerebrolysin-treated patients compared with 15% of placebo-treated patients. The secondary outcome was a composite of twelve outcome scales, including gait velocity, fine motor function, ADL independence, aphasia, neglect, quality of life, cognition, and depression. The composite outcome showed a small superiority of Cerebrolysin. The safety of Cerebrolysin was equivalent to placebo. The most common adverse effects were UTI, depression, and cytolytic hepatitis in the Cerebrolysin group, and UTI, hypertension, and depression in the placebo group.

A larger-scale phase III randomized trial is needed to ensure that effects were not exaggerated by poor outcomes in the placebo group, small sample size, or the fact that both groups engaged in early and sustained rehabilitation therapy. However, this phase II trial is quite encouraging for the prospect of an effective neuroprotective and neuroplastic agent on the horizon.

Stroke AHA/ASA @StrokeAHA_ASA
13 hours ago
#GraphicAbstract from @MajidiShahram & colleagues report that in a retrospective, observational case series, > 50% of #ELVO #Stroke patients were #COVID19 positive in NYC outbreak & these patients were younger, 🚹, and less likely to be white. Read more: https://t.co/VdHMqWlbaC https://t.co/5lvQNLhT2A
View on Twitter 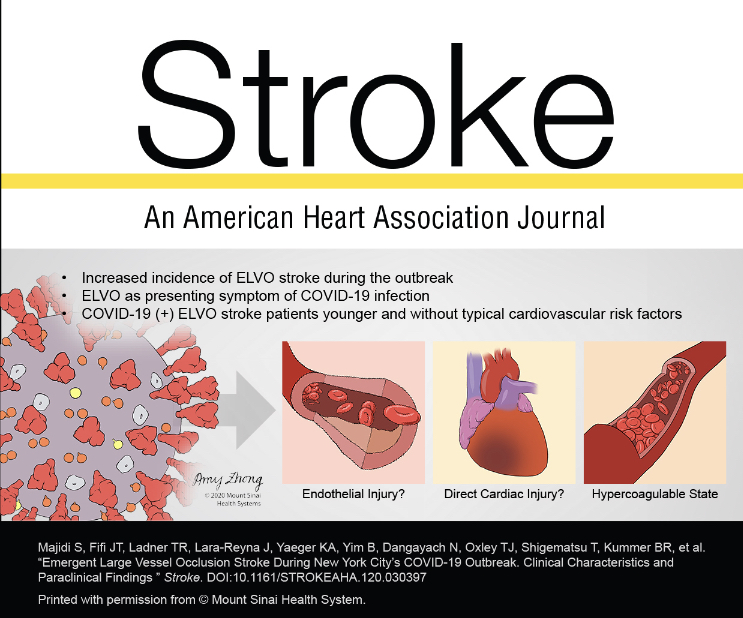